Arik Roper occupies a venerated place among contemporary artists. His immersive illustrations appear in many contexts — from science textbooks to mead labels. Still, his most well-known work is tied to music. Throughout a career spanning more than two decades, Roper’s designs for the likes of Iron Maiden, Cathedral, Windhand and The Black Crowes have earned him a devoted following.

Like Roger Dean, whose covers for progressive rockers Yes set the bar for ‘70s conceptual album art, Roper specializes in worldbuilding. “I love a lot of that stuff,” says Roper, speaking to DOPE from his home in New York City. “I’m unashamedly into a lot of fantasy artwork. Always have been.”

He goes on to defend the word “escapist,” an oft-maligned descriptor. “There’s a stigma attached to that term, but I consider it a compliment.”

However, in contrast to Dean’s utopian landscapes or say, the nightmarish biomechanics of H.R. Giger, Roper’s visions are earthy, based on the natural world of foliage, vegetation and yes, even fungi.

“Most of the work people have seen of mine is quite organic — moss, mushrooms, wood — stuff like that. It became part of my aesthetic many years ago, probably from a childhood spent living in the woods. That’s the place where my imagination goes — where life is fertile, and nature is in charge.”

Many of Roper’s landscapes exist in the forest ecosystem. “I have an interest in off-world sci-fi, but that stuff is more architectural and regimented. I prefer to work with loose forms, which lend themselves to roots and trees.” Arik Roper paintings feel otherworldly, yet oddly familiar. “Science fiction doesn’t have to be glass towers and spaceships,” he says.

Whether bringing to life a tribe of pothead pilgrims known as the Weedian for Sleep’s “Dopesmoker” cover or releasing a coffee table book entitled “Mushroom Magick” (Abrams, 2009), Roper’s imagery often courts psychedelia. In the case of “Mushroom Magick,” the psilocybin connection is intentional.

“It’s like seeing the mushrooms in an altered state,” he confirms. “People who have an appreciation for that type of mushroom should feel that essence in there.” Still, psychotropic voyagers aren’t Roper’s sole intended audience. “The book could also appeal to grandmothers and folks who are interested in mycology.” And then there’s Sleep, the stoner metal trio with which he’s frequently associated. Roper doesn’t downplay his symbiotic relationship with that band. “I’ve done a lot for them and, conversely, they’ve done a lot for me. Their reputation has become so legendary, and my art has gone along with it. It’s been a mutually beneficial thing.”

While his work for Sleep is undoubtedly iconic, Roper’s oeuvre is full of such highlights. The cover of Earth’s 2008 release, “The Bees Made Honey in the Lion’s Skull” (Southern Lord), is a standout. “Obviously, it’s very literal. The title is based on a quote from the Old Testament. Dylan [Carlson, vocalist-guitarist of Earth] wanted it to be very colorful and look kind of like a Hindu painting. Something vibrant as opposed to gloomy, which was in fashion for heavy music at the time.”

Despite his penchant for such unconventional subject matter, Roper is formally trained; he holds a degree from New York’s School of Visual Arts. While academia provided certain benefits, his main takeaways weren’t craft exercises as much as preparation for a life in arts.

“As far as technique, I developed that on my own. I’ve been drawing my whole life,” explains Roper. “SVC brought me to New York City, which was hugely beneficial to my career. It put me in a lot of the right places at the right times and helped me make connections. The early ‘90s were a good moment to be doing these things.”

With so many musical projects in his portfolio, it seems sound could play a significant role in his creative process. “I rarely work in silence,” he confirms. “I listen to a lot of podcasts and radio — mostly history, science, esoteric stuff, spirituality, the paranormal. Often, the things I’m working on are somewhat fantastic, if not very fantastic, and that does help set the mood.”

As for musical favorites, a retro theme permeates Roper’s tastes. “I don’t keep up with new music as well as I should. Of the old, I like a lot of psychedelic rock, early ‘70s ambient synthesizer stuff, krautrock.” Still, he won’t rule out the possibility of being blown away by a new discovery. “I’d love to find something I’m crazy about. Most of the time, I feel like it hasn’t been done better than it was decades ago.”

Roper’s visual inspirations are similarly removed from current trends. “I really like N.C. Wyeth and Andrew Wyeth,” he says, referencing two American giants. Roper goes on to praise Gustave Doré and JMW Turner from the “golden age of illustration” of the 1800s, as well as ‘40s visionary artist Ernst Fuchs. “This may go without saying, but I like Rembrandt’s stuff — more than your average master,” Roper adds with a laugh.

These painters favored the atmospheric style also prevalent in Roper’s creations. “A lot of those I’ve mentioned have a mastery of lighting and chiaroscuro. They create an environment with the lighting itself.”

Roper’s workflow is entrenched in tradition. “I mostly use watercolor, gouache, pencil, and liquid ink. I’ve been scanning my stuff and delivering it that way for years.” Advances in the digital realm have begun to force their way into his process, however. “Tablet technology has gotten to the point where the responsiveness of the screen is very tight. I won’t say it’s like paper, but it’s extremely good.”

So, after more than twenty years of rock illustration, does Arik Roper have any interest in putting out a collection of his music-themed creations?

“I’m going to undertake getting one published. I’ve put it off for a long time because I knew the longer I waited, the more stuff I’d have. Some people put our retrospectives after three years of working. I feel like saying, “Give it some time.” Ari Rosenschein is a Seattle-based writer whose essays and fiction appear in Entropy, Noisey, Drunk Monkeys, P.S. I Love You, Observer, The Big Takeover, The Bookends Review and elsewhere. He holds an MFA in creative writing from Antioch Los Angeles. Coasting, his debut collection of short stories, is available from Pen Name Publishing. Ari lives with his wife and dog and enjoys the woods, the rain and the coffee of his chosen region. 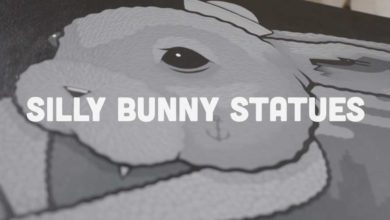 DOPE Life | Jeremy Fish: The Story of the Bronze Bunny